What Does That Mean for You?

About half of U.S. states have either passed liberal medical marijuana laws or have legalized recreational use. For a while, it looked like the Peachtree State might join the parade. In January 2018, a group of Georgia lawmakers introduced a legalization bill in the Senate. At first, there was considerable buzz over the proposal and it appeared to have considerable support. But now, almost a year later, that bill appears to be dead in the water.

For the most part, Georgia still has some of the most restrictive marijuana laws in the country. A few municipalities, most notably Savannah and Atlanta, either no longer arrest people for possessing small amounts or only punish these offenses with fines. However, these are not “legalization” measures. They are executive decisions which could change tomorrow.

Fortunately, although marijuana possession is a serious offense, defendants have a number of legal options. A pretrial diversion program is usually available, and Cobb County has one of the better ones in the state. If prosecutors refuse to make a deal, possession cases have a number of defenses.

Georgia’s laws begin harshly and escalate quickly. Possession of less than one ounce is a misdemeanor punishable by a year in jail and/or a $1,000 fine. That amount could be as little as a few grains of unburned marijuana in a smoked joint.

Possession over one ounce is a felony which carries up to ten years in prison. Fortunately, an ounce of marijuana is a lot of weed. Depending on their size, there are usually about fifty joints in an ounce. Unrolled marijuana is a little harder to weigh. A dub sack weighs about 0.03 ounces and a dime bag weighs about 0.02 ounces. Admittedly, my math is not very good. But an ounce of dime bags is a lot of dime bags.

There’s a trafficking presumption for amounts over ten pounds. That much marijuana would probably fill a large trunk or a small room, so the presumption makes sense. Prosecutors can also upgrade simple possession charges to trafficking charges. Intake prosecutors look for additional circumstantial evidence like:

Georgia also has location upgrades. The penalty doubles for trafficking within 1,000 feet of a drug-free zone, school, park, or housing project. 1,000 feet is a long, long way. That’s about three football fields. So, the upgrade may apply even if the school or other place is not within eyesight.

The law enforcement lobby is one of the main reasons marijuana is still illegal in Georgia. In public, these advocates usually cite the “gateway” theory. For many years, this argument has been the center of anti-legalization efforts. The idea is that people (mostly kids) start with weed and then move onto harder drugs. We see that in other areas. For example, kids who vape often start smoking later, and people who are addicted to prescription painkillers often graduate to heroin.

But that may not be the real reason law enforcement agencies like strict marijuana laws. These laws create lots of work for police officers and lots of revenue for the criminal courts system. Legalization would make most of these things go away.

So, pretrial diversion is an effective compromise. Officers make arrests, courts make money (or at least a little bit of money), and defendants face no long-term consequences.

Diversion programs vary among different jurisdictions and sometimes even among different courts. Possession under an ounce is almost always eligible. Some courts extend the program to some felonies. After the defendant pays a program fee and completes probation, the prosecutor dismisses the charges. That probation usually includes some marijuana education classes and some community service. Usually, it does not include reporting or other traditional probation conditions. 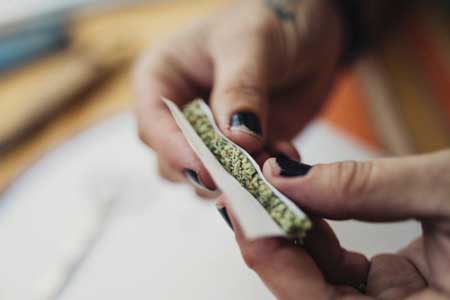 Defenses to Trafficking and Possession Cases

Even if you have a defense, pretrial diversion is usually a good deal. Trials are inherently uncertain. Your defense may be almost airtight, but a Cobb County jury could still convict you. But if prosecutors do not offer diversion, or probation is not a good idea, there are other options.

Many people, including many lawyers, confuse “proximity” with “possession.” These are two different concepts. Emma could literally be sitting on a box full of dime bags and not possess them in a legal sense. In addition to proximity, the prosecutor must establish:

Prosecutors must establish every element of every offense beyond a reasonable doubt.

Location upgrades are a bit more complicated. The arrest report usually says the offense took place at the intersection of X and Y or in the 3500 block of Z. That’s not a very specific location. The exact place may well be outside the 1,000-foot perimeter. Furthermore, a place like “a school” can be inexact. What if “the school” is actually part of an office building or shopping mall?

Finally, there may be little or no connection between the aggravating evidence and the marijuana. A gun in the living room usually has almost nothing to do with marijuana in a bedroom. Prosecutors must also establish intent to distribute, and not just the opportunity to distribute. That’s two different things.

Defenses like these are useful at trial and also during pretrial negotiations. Usually, an attorney can leverage these defenses into a lesser sentence or reduced charges. In many cases, deferred adjudication may be available as well. In these cases, the defendant is charged with a crime but never convicted of a crime, even if the defendant receives probation.

Marijuana possession is still highly illegal in Georgia, but defendants have options in these cases. For a free consultation with an experienced criminal defense attorney in Marietta, contact The Phillips Law Firm, L.L.C. Home and jail visits are available.