You are here: Home / Criminal / A Complete Guide to Theft Cases in Cobb County

The coronavirus pandemic thrust fraud cases, which is a specific kind of theft, into the spotlight. Unemployment claims are a good illustration. Here in Georgia, the initial number of claims exceeded the number of people in the civilian workforce. Other states reported similar issues. Generally, states fielded so many of these claims in the early days of the pandemic that they wrote checks without asking too many questions, in order to process claims as quickly as possible. Of course, not all these claims were fraudulent. But a significant number of them involved theft.

Much like DUI and some other offenses, the collateral consequences of a theft conviction are usually much worse that the direct consequences. For example, theft is a crime or moral turpitude. As a result, a conviction could have lingering civil consequences, as well as some immigration consequences. Therefore, reducing, or preferably eliminating, these consequences is the top priority of a Marietta criminal defense lawyer. There are a number of ways to accomplish this goal. 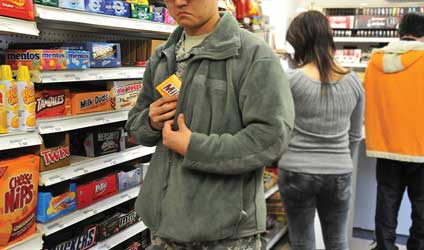 Georgia has one of the broadest theft statutes in the country. It’s illegal to appropriate the property of another person without that person’s consent and with the intent to deprive the owner of the full use and enjoyment of that property. This statute is quite a mouthful, so let’s break it down a bit.

“Appropriate” could mean physically taking property, like money or a car. It could also involve false pretenses, such as filing a fraudulent unemployment claim. Theft by deception or threat is also illegal. However, there are some limits. Any misrepresentation must usually involve a current fact and a credible claim.

Assume Tina says she’s expecting a large inheritance from her dead aunt, and thus convinces a store to extend credit. She might be guilty of something, but she’s not guilty of theft. Or, if Ralph threatens to blow up the Moon unless a dealer gives him a new car, he might be guilty of something, but he’s not guilty of theft. More commonly, this defense involves writing an NSF postdated check. These documents are credit instruments as opposed to checks.

The seemingly innocuous “of another person” language makes a big difference to a Marietta criminal defense attorney. The owner, or the owner’s agent, must testify at trial. As a result, many older theft claims fail due to a lack of evidence. More on that below.

The law giveth, and the law taketh away. In many states, the intent element requires the intent to permanently deprive the owner of the property. But in Georgia, even if Ralph only planned to use the car for the weekend, he could be charged with theft.

Some Affirmative Defenses to Theft

Voluntary intoxication is also a defense to some other specific intent crimes, such as burglary, murder, and aggravated assault.

Most people have heard that “ignorance of the law is no excuse for violating it.” This aphorism is generally true in Georgia courts. Mistake of fact is different. If Wanda sincerely believed that she owned Brenda’s phone, she is not guilty of stealing it.

Entrapment comes up occasionally. If Max told Wanda to take Brenda’s phone, and Max wanted Wanda to get in trouble, the defense could apply.

Many criminal cases are single-witness cases. The arresting officer is the only witness. Unless a Marietta criminal defense lawyer can suppress the officer’s testimony, lack of evidence normally is not an issue.

However, as mentioned, theft cases are a lot different. If a theft defendant requests a trial, the assigned date could be as much as a year after the theft. Most people relocate frequently, typically for employment or personal reasons. So, there is a good chance that, by the time the trial date rolls around, this critical testimony might be unavailable.

If prosecutors spot this problem early enough, they can usually amend the charging documents and change the name of the owner.

On a similar note, if the defendant made restitution or the owner didn’t actually lose the property (e.g. a store detective stopped Jan before she left the store), the owner often loses interest in the case. Technically, prosecutors can subpoena these people and force them to testify against their will. But prosecutors normally only exercise this power in extreme cases.

Since theft is a nonviolent crime, pretrial diversion is often available, even in felony cases. Program requirements vary in different courts. Generally, however, if the defendant completes a few basic requirements, like performing community service, and avoids further legal trouble for a few months, prosecutors dismiss the charges. This dismissal means no conviction on your permanent record.

Additionally, most jurisdictions give prosecutors broad authority to dismiss these cases on a discretionary basis. These dismissals are often available in misdemeanors, especially if the owner does not push prosecutors into pursuing the matter.

If all else fails, deferred adjudication is almost always available, even if the defendant is charged with a felony and has a criminal history. The judge places the defendant, who pleads guilty to the offense, on probation. If the defendant successfully completes probation, the judge dismisses the case.

Serious theft charges can usually be resolved successfully, mostly because numerous defenses are available. For a free consultation with an experienced criminal defense attorney in Marietta, contact The Phillips Law Firm, LLC. We routinely handle matters in Cobb County and nearby jurisdictions.