You are here: Home / Criminal / What You Should Know About Bond Revocations

Bail reform is a hot topic these days. In about a half-dozen states (not including Georgia), roughly 80 percent of jail inmates are unsentenced. This statistic might be misleading. Many of these individuals have probably posted bail and are on their way out. Nevertheless, reformers paint a picture of individuals who have not been convicted of anything languishing in jail.

However, the cash bail system is certainly imperfect, to say the least. Like many problems of this magnitude, there is no clear solution. In 2019, New York lawmakers ended the cash bail system, for most non-violent crimes. Significant problems emerged, and this drastic reform only lasted a few months. In the middle of 2020, New York Governor Andrew Cuomo gave judges much more discretion in this area.

A bond revocation crackdown, like the one ongoing in Cobb County, is basically an indirect bail reform measure. People who are in jail because they violated bond conditions may not have been convicted of a crime. But they broke the rules. If you get caught in this dragnet, a Marietta criminal defense lawyer can probably help. Attorneys secure pretrial release in criminal cases. Additionally, lawyers can negotiate more lenient bail conditions, so you do not have trouble in the first place.

Why You Need to Stay Out of Jail 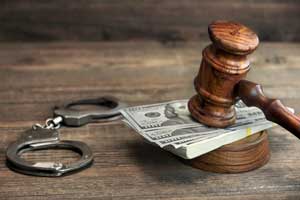 Most people know someone who spent some time behind bars and was not the same person after s/he was released. That’s probably because the individual sustained an incarceration-related brain injury.

Jails have sights, sounds, and smells that most people have never experienced before. This information goes to the amygdala. This part of the brain controls emotional responses. If the amygdala gets bigger, people react emotionally instead of logically. So, many inmates accept unfavorable plea agreements just so they can “get it over with.”

Furthermore, this process releases slight or fight stress hormones. Neither fight nor flight is an option behind bars. So, these stress hormones build up and cause additional injury.

There are other reasons to stay out of jail as well. Incarcerated people usually lose their jobs. They are cut off from friends and family, so these relationships suffer. Furthermore, incarcerated defendants cannot participate in their own criminal defense in any meaningful way. In fact, because of coronavirus, they might not even be able to meet with their Marietta criminal defense lawyers face-to-face.

Most people get out of jail before trial by posting cash bond or a bail bond. Cash bond is a lot like a rental security deposit. If you fulfil the terms of the lease or the pretrial release, you get most of the money back. A bail bond is basically an insurance policy. If you violate bail terms, the bail bond company bears the financial risk. Each form of release usually has two major conditions.

Furthermore, defendants must not be rearrested. An arrest is different from a conviction. Typically, officers only need probable cause to arrest individuals. This standard of proof is a little higher than guilt by association or being in the wrong place at the wrong time. But it is not much higher.

These conditions are also more difficult to adhere to in the current environment. For example, because of coronavirus, it’s harder to get around. Frequently, the bail bond company is near the jail, and the defendant lives on the edge of Cobb County.

Furthermore, remaining inside the county is sometimes an issue. Many people have close friends or family in a nearby county. Other defendants work in a neighboring county.

Finally, some of these conditions, like the injurious habits condition, are rather vague. One literally could be busted for being in the wrong place at the wrong time. “Right” and “wrong” are two of the most subjective words in the English language.

How an Attorney Can Help

Your pretrial freedom is at risk if you do not take the matter seriously. County and bail bond company officials get nervous in these situations. The mere fact that you have a Marietta criminal defense attorney reassures these officials. They know you are taking things seriously.

Furthermore, as mentioned, attorneys can negotiate more favorable release terms. That could mean modifying, or even eliminating, some of the more oppressive conditions. Many attorneys can also handle bail bonds themselves. In the cases, the conditions are geared specifically to an individual.

On a related note, if the defendant violates a condition, an attorney can arrange for a voluntary surrender. Things usually go more smoothly in these cases.

Perhaps most importantly, an attorney stands up for your right to a speedy trial. The sooner the case ends, the sooner you are off bond. The conditions immediately disappear at that point. An attorney can resolve a case through a trial or a plea bargain. Since an attorney evaluates your case and is dedicated to you, you know that the proposed outcome is always the best one available.

Pretrial release is an important component of an overall defense. For a free consultation with an experienced criminal defense attorney in Marietta, contact The Phillips Law Firm, LLC. We routinely handle matters in Cobb County and nearby jurisdictions.