You are here: Home / Personal Injury / The Danger in Being a Pedestrian

Pedestrians typically include walkers, joggers, and people who use wheelchairs and strollers – all, of course, are vulnerable to harm or death from cars. Smart Growth America recently provided statistics on pedestrian fatalities occurring between 2005 and 2014, claiming that cars killed 46,149 pedestrians. The organization tallied deaths for all 50 states and shows which locations are the most dangerous places for foot traffic. It also reflects which groups of people are most frequently involved in these fatalities.

You might be surprised that New York is ranked 38th on the list, while Georgia placed 10th with 1,055 deaths. The report also examines the 104 largest metropolitan areas based on Census Bureau reports and listed Atlanta as 26th with 819 deaths. The Pedestrian Danger Index (PDI) is the determining factor, and it’s a measure of “the share of local commuters who walk to work and the most recent data on pedestrian deaths.”

Sadly, these statistics show that people of color and the elderly seem to be the most impacted by pedestrian fatalities (see chart below). Smart Growth America believes the people in these groups encounter “disproportionately unsafe conditions for walking.” Some areas in Georgia, however, are improving access to pedestrian-friendly features such as installing bike and walking paths along major thoroughfares, but inner cities often lack proper protection for their foot traffic. 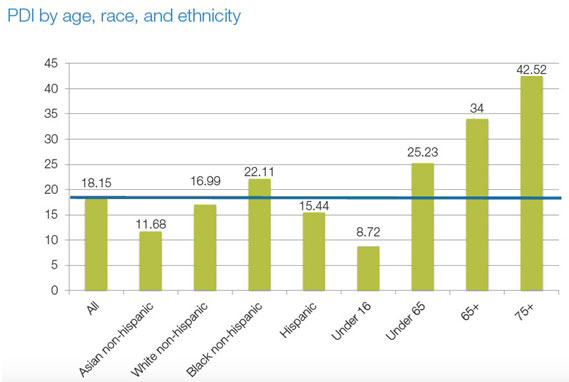 Look Both Ways Before You Cross the Street!

We’ve heard this many times from our parents, and the common sense advice certainly still applies. Other ways to stay safe include using sidewalks, wearing reflective clothing, avoiding using your mobile device, facing the oncoming traffic while walking on the shoulder if no sidewalk is available, crossing streets at intersections and crosswalks, and no walking on or near roads if you are under the influence. In fact, the National Highway Traffic Safety Administration (NHTSA) states that in 2014, 34% of all pedestrians killed in traffic crashes had a blood alcohol content (BAC) of greater than or equal to 0.08 grams per deciliter.

What the Government Is Doing to Protect Pedestrians

The U.S. Department of Transportation (DOT) researches ways in which pedestrian accidents can be prevented. One of those methods employs the use of pedestrian detection devices. Several states have joined a pilot programs exploring vehicle-to-pedestrian (V2P) technology such as MAPS, a smart phone application that warns bus drivers about people using crosswalks in the path of their buses. MAPS also provides warnings to people who are visually impaired.

Incidentally, automakers are taking action, too. Engineers have already designed many driver safety features such as lane departure warning and automatic braking. The addition of rear-view cameras has aided in pedestrian safety, but car companies may use forward collision warnings to let drivers know about pedestrians, too. The Insurance Institute for Highway Safety (IIHS) states that collisions between cars and pedestrians from 2005 to 2009 were predominantly frontal crashes. In fact, the majority of walkers struck were crossing streets rather than walking alongside the road, and oftentimes, the driver had an unobstructed view. These new safety features can certainly help drivers avoid deadly run-ins.

Meanwhile, What’s Going on in Atlanta?

PEDS is an advocacy group trying to enhance pedestrian safety by partnering with Georgia’s DOT. Presently, they are trying to help walkers who take public transit to work and other locations. Nearly 75% of transit trips require a walk to and from the various stops, and according to the Atlanta Regional Commission, over 20% of pedestrian-related collisions in the metro area happen near stations and bus stops. They are hoping to create better, safer routes to these locations.

PEDS is also concerned with crosswalks, engineering them so that they’re more effective, particularly on roads with multiple lanes.

Several things happen if you refuse a Breathalyzer in Georgia. To encourage, or rather force, more … END_OF_DOCUMENT_TOKEN_TO_BE_REPLACED

Historic violent crime levels are prompting citizens to go to the polls in 2022. Although everyone … END_OF_DOCUMENT_TOKEN_TO_BE_REPLACED

After a jury convicted him, a Winterville, Georgia man who allegedly tried to hook up with a … END_OF_DOCUMENT_TOKEN_TO_BE_REPLACED

In Georgia, and most other states, all parenting time and child custody decisions must be in the … END_OF_DOCUMENT_TOKEN_TO_BE_REPLACED

Especially if the holiday falls on a Monday, Tuesday, Friday, or Sunday, children are between three … END_OF_DOCUMENT_TOKEN_TO_BE_REPLACED