You are here: Home / Criminal / The Cops Caught Me with Meth. What Are My Options?

During World War II, the Germans distributed methamphetamines to the Wehrmacht for use as stimulants. The soldiers called them stukatabletten (Stuka Tablets). In the United States, during the 1950s and 1960s methamphetamines were popular diet pills, https://livingwellnessmedicalcenter.com/phentermine-online/. These two effects encourage illicit use of methamphetamines, which have been a controlled substance in Georgia since the 1970s. The meth available today is more powerful and addictive than ever. That’s probably why the number of fatal meth overdoses has skyrocketed since 2015.

To examine the legal consequences of meth possession, let’s look at a hypothetical example. Sherry was a waitress at the only joint in town. She was smoking meth in her friend’s house, which her friend had just cooked, when the law came bustin’ in. At first blush, Sherry seems to be in a lot of trouble. But complex drug possession arrests, like meth raids, have a lot of moving parts.

Therefore, Sherry should immediately meet with a Marietta criminal defense lawyer about her case. Because they are so complex, these dug raids usually involve a number of possible defenses. An attorney can use this defense to obtain a successful result in court. This defense could also be leverage during pretrial settlement negotiations. Additionally, even if Sherry has no defense at all, a Marietta criminal defense lawyer might be able to resolve her charges successfully. 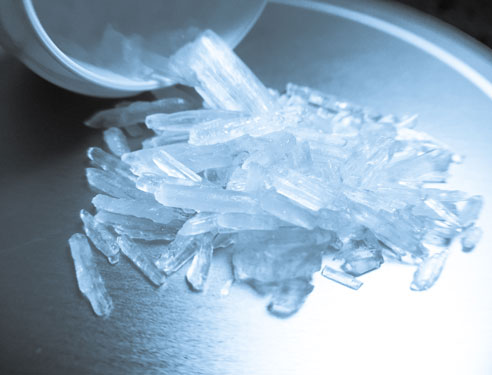 Meth possession penalties in Georgia usually depend on the amount of the drug. The form matters as well, especially regarding possession issues. More on that below.

Meth busts usually involve law enforcement incursions into private property (the law came bustin’ in). A narrow search warrant exception sometimes applies in these situations. But for the most part, officers must have a warrant. And, that warrant must be based on probable cause.

In the movies, if officers come to a house with a “warrant,” they tear the place apart to find what they are looking for. Real life is different. Search warrants must be specific as to time, place, and item. When officers search Sherry’s home, they may search specific rooms, like the garage or basement, at a specific time, like the 28th or the afternoon of the 28th.

Furthermore, they may only search for meth, or perhaps for drugs. So, they can only look in places where drugs might be. Additionally, if they find other contraband during their search, they may not touch it, unless consent or another search warrant exception applies.

Probable cause is sometimes an issue as well. Typically, officers rely heavily on a CI’s testimony. Most Confidential Informants receive money or leniency in exchange for their tips. Many people will say practically anything for love or money. Therefore, unless the CI has a solid track record, the CI’s testimony usually does not, by itself, constitute probable cause.

Some corroborating proof could salvage the warrant in these situations. The fact that officers found drugs does not constitute proof. Prosecutors cannot work backwards. The warrant stands or falls based on what the issuing judge knew at the time.

A trial judge usually considers a warrant’s sufficiency during a pretrial hearing. Depending on the judge’s rules, a Marietta criminal defense lawyer can usually introduce evidence and make legal arguments at this hearing. This same pretrial hearing could address the legal possession issues in Sherry’s case. Just because she was home when officers found meth, that doesn’t mean she “possessed” it according to Georgia law. Two elements of possession might come into play here:

The state must prove each element of possession, and every other element of the offense, beyond any reasonable doubt.

Since it’s a non-violent felony possession matter, Sherry’s case will probably go to Cobb County’s drug treatment court. This court emphasizes “intensive supervision, drug treatment and rehabilitation” as opposed to simple punishment. Most first-time offenders who successfully pass a screening interview are eligible for the treatment program. Therefore, even if Sherry’s defenses do not hold up in court, she’s probably eligible for treatment.

The supervision usually lasts twelve or eighteen months. Defendants must check in with a supervision officer weekly for about the first month and bi-monthly thereafter. Additionally, most defendants must work and/or attend school full time, perform community service, and complete other program requirements.

The Cobb/Douglas Community Service Board (CSB) handles all the program’s drug treatment aspects. This treatment usually features a combination of group therapy, individual therapy, and detox therapy. It’s important to complete all recommended aspects of this treatment program, and complete then with a good attitude. A failure in either area could result in termination from the program and referral to superior court. That’s bad news.

Rehabilitation usually involves relapse prevention. The minimum requirements are frequent meetings and frequent drug tests. If the defendant has a new place to live or demonstrates other life changes which avoid temptation, that’s even better.