You are here: Home / Criminal / Pedestrian Bill of Rights: A Closer Look

First, the common elements. Vehicle speed is almost always a factor. At impact speeds of 20mph or less, the pedestrian fatality rate is about 10 percent. At 40mph or grater, the fatality rate is 90 percent. So, a few ticks on the speedometer make a tremendous difference.

The victims and their activities are normally similar as well. Many pedestrian crash victims are either young children or older adults. Typically, children are almost invisible on busy streets and older people have at least slight mobility impairments. Once again, any additional vulnerability makes a big difference.

Additionally, most pedestrian-on-vehicle collisions occur outside marked crosswalks. In court documents, insurance company attorneys often state that the victim “darted out into traffic.” This line raises the sudden emergency defenses. Well-prepared Marietta personal injury lawyers can usually debunk the sudden emergency defense in this context. But that does not keep insurance company lawyers from trying. Bless their hearts.

The Car Is Always Wrong 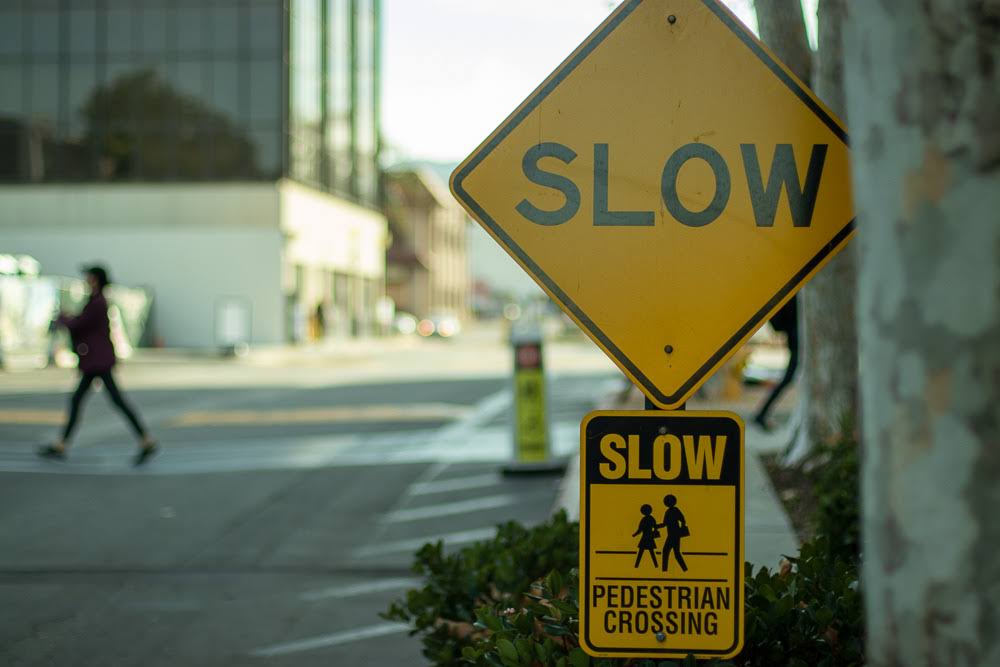 This pedestrian right of way is a fairly accurate depiction of Georgia law.

To be clear, pedestrians do not have the right-of-way unless they cross inside a marked crosswalk with the light. That crosswalk could be a permanent one at an intersection or a virtual one at a busy non-intersection crossing. However, this legal fact does not alter the driver’s duty of care.

All drivers have a duty to avoid accidents whenever possible. So, if a tortfeasor (negligent driver) sees a pedestrian in the street, the tortfeasor has a duty to stop, slow down, or otherwise avoid hitting the person, unless such a maneuver might cause another crash. This choice is not a factor if the pedestrian has the right-of-way, because all cars must stop.

So, in Cobb County, the car is not always wrong, but the car is usually wrong.

Jay walking Is Not a Crime

Many advocates argue that Georgia and the other states should abolish jaywalking laws. That would probably be a good idea. Many tortfeasors confuse right-of-way and the duty of care. They think “If I have the right-of-way that means the pedestrian must get out of my way.” If tortfeasors understood their legal responsibility, there might be fewer pedestrian accidents.

But this one is probably not going to happen. Physicists like Isaac Newton often talk about inertia. Newton’s first law is “Every object in a state of uniform motion will remain in that state of motion unless an external force acts on it.” In the legal context, this principle means that once something is legal or illegal, it will remain that way, unless there is a compelling force dictating change.

Of all the major pedestrian rights this one may have the best chance of becoming law in Georgia. But there are some obstacles.

As mentioned, speed is the critical factor in pedestrian accident injury severity. Therefore, some municipalities have already taken action. For example, in 2014, New York City decision makers reduced most speed limits to 25mph. However, many drivers did not like the lower speed limit and felt they were unfairly singled out as the cause of pedestrian accidents.

Driver attitude is only one factor delaying change. IN Georgia and most other states, vehicle traffic patterns determine speed limits. Engineers and decision makers do not factor in pedestrian traffic volume and speed.

A six-inch curb may not be much of an obstacle to many people. But for people with mobility impairments, that curb is essentially a cliff, especially at night. As a result, most Marietta crossings are Americans with Disabilities Act compliant. Most corners are ramps instead of curbs.

Not all intersections are safe in this way. Furthermore, after construction crews resurface the sidewalk, they post no warning signs. So, many people think they must step off a curb and they lose their footing.

In terms of negligence law, these issues involve sovereign immunity. Typically, Cobb County and other governments have immunity for discretionary acts, but not ministerial acts.

Assume an intersection has a curb instead of a ramp. If Tina steps off the curb wrong and breaks her hip, she probably does not have a claim against Cobb County for negligence. The decision to install a ramp is discretionary. The ADA comes into play here as well, so the issue is rather complex.

Now assume the county converts the curb to a ramp, and water collects in the walkway. Tina does not see the water, so she slips and falls. Removing the water was a ministerial act, much like replacing a burned-out light bulb. Since the county had no discretion, sovereign immunity may not apply. Once again, the issue is complex.

The final item is another roadway design matter. SO, the same legal issues may apply, with regard to sovereign immunity.

Most major streets in Cobb County are at least four lanes wide. Additionally, the red lights are short and the green lights are long. That’s because these roads were designed to move vehicle traffic as quickly as possible.

That environment may be good for motorists, but it is bad for pedestrians. In many cases, people may only have a few seconds to cross a wide street. That’s usually not enough time, if the pedestrian has any mobility impairments.

But recall the whether the light is red or green; motorists still have a duty to avoid pedestrian collisions. In other words, “green” does not necessarily mean “go.” Green means go if the way is clear. So, tortfeasors cannot blame traffic light patterns for their own breaches of care.

Pedestrians have important legal rights when they cross the street. For a free consultation with an experienced personal injury attorney in Marietta, contact The Phillips Law Firm, LLC. We routinely handle matters in Cobb County and nearby jurisdictions.