A Chesterfield man faces multiple criminal charges after he allegedly fired a gun into the air during a funeral.

Police investigators say a fight broke out at a funeral. During that fight, a man pulled out a pistol and fired two shots into the air. Rosalinda Rivera, an associate pastor at New Life Outreach International Church on Turner Road, corroborated these findings. She said some non church members rented the church building to accommodate out-of-town mourners. Two off-duty officers in the parking lot tried to get into the church when they heard the shots. Since “people [were] coming out of the building in every direction,” the shooter slipped away. He was arrested later.

To follow up, police checked area hospitals and emergency room medical centers to ensure no one showed up with a gunshot wound. 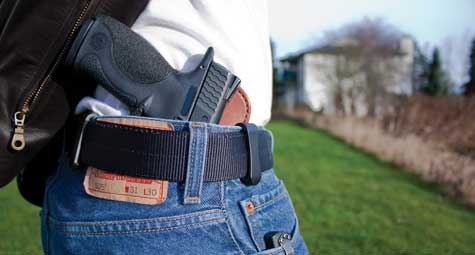 Illegal discharge of firearms charges are quite rare. Authorities often see such infractions as a no harm, no foul thing. The unsettling nature of this incident probably prompted official action. There’s something very wrong about shooting a gun at a funeral.

Illegal possession of firearms charges are much more common. Usually, illegal gun possession isn’t a very serious offense, unless the defendant was in a gun-free zone. The gun-free zones in Georgia are:

People who are not licensed CCW carriers are also generally prohibited from carrying firearms in recreational areas, government buildings, parks, historic sites, and on the campuses of higher education institutions.

A gun trust avoids many of these issues. The trust, instead of the individual, legally owns the firearm. So, any co-trustee is, in effect, a co-owner. Generally, settlors (people who set up trusts) may add co-trustees without going through much of the gun owner red tape.

Moreover, when the original gun owner dies, a trust keeps the property transfer private and also often includes some age-related and other qualifications for beneficiaries.

Arrest warrants, like search warrants, must be based on affidavits which show probable cause. Generally, arrest warrants either rely on witness testimony or physical evidence.

Usually, affidavits that feature the testimony of several different witnesses, especially if the witness testimony varies slightly, are the most reliable affidavits. If multiple witnesses give the same testimony, they usually got together to get their stories straight or someone told them what to say. Either way, however, multiple witness affidavits probably demonstrate probable cause. This standard of evidence is quite low.

Single witness arrest warrants are much more problematic for prosecutors. That’s especially true if the witness received money or leniency in exchange for testimony. Many people will say nearly anything for love or money. So, unless the witness provided some corroborating proof, even on an unrelated matter, the affidavit may lack probable cause.

Speaking of corroborating proof, if this proof involves police-seized evidence, the evidence must be legally admissible. If officers didn’t have a warrant, a narrow search warrant exception must apply. Some typical exceptions include:

Search warrant exceptions, like warrants, stand or fall on their own. Prosecutors can’t argue that if police found illegal items or got the bad guy, the arrest or search must have been proper.

We mentioned non-officer witnesses in warrant matters above. Prosecutors can often get away with shaky witnesses during the warrant phase. But witness issues often loom large in trials.

The burden of proof is much higher. At trial, prosecutors must prove guilt beyond any reasonable doubt. If a witness may be biased, a juror could have a reasonable doubt. And, one juror is all it takes. The same thing is true if witness competency, like view of the crime, is an issue.

Additionally, and perhaps more importantly, a Marietta criminal defense lawyer has a chance to cross examine witnesses at trial. If an attorney finds a hidden bias or incompetency, or the witness changes his/her story, the jury may return a not guilty verdict.

There’s a difference between a criminal charge and a criminal conviction. For a free consultation with an experienced Marietta criminal defense lawyer, contact The Phillips Law Firm, LLC. Convenient payment plans are available.