Investigators believe speed was a factor in a dual fatal accident in South Fulton.

Because of the extent of the fire, few details were available. By the time emergency responders arrived, one of the vehicles was fully engulfed in flames. The accident killed 32-year-old Phylicia Nixon and 67-year-old Evelyn Abney. A third victim, whose name was not released, was transported to a nearby hospital with serious injuries.

Approximately an hour earlier, local police responded to the scene of another speed-related collision. That crash involved a vehicle rollover which caused serious injuries.

Speed as a Factor in Car Crashes 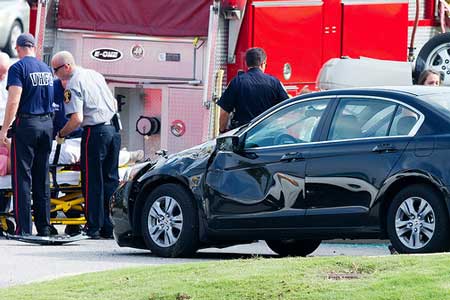 Excessive velocity is a factor in about a third of the fatal car crashes in Georgia. Speed increases the risk of a collision and also increases the force in a crash.

Adverse environmental and other factors, such as pavement condition and vehicle weight, increase stopping distance even more.

Speeding around bends in the road is another example. Fast-moving vehicles require less effort to steer than slow-moving vehicles. So, many speeding drivers oversteer as they approach curves. Then, they panic and overcorrect. As a result, they often lose control of their vehicles.

Furthermore, speed multiples the force in a collision between two objects. The scientific formula, f=ma, is a bit too complex for a country lawyer to understand. But the practical effects are obvious.

There is an old story that a penny dropped from the top of the Empire State Building gathers so much speed that it is fatal to a pedestrian on the street. That tale is not exactly true, but it does illustrate the point about mass, force, and acceleration.

In this context, speed transforms non-injury fender benders into serious injury, or even fatal, collisions. Speed also transforms small objects inside a vehicle, like cell phones, into high-speed missiles.

Negligence per se involves a traffic safety law. Examples include speeding, DUI, or running a red light. If the tortfeasor (negligent driver) breaks such a law, and that violation substantially causes injury, the tortfeasor could be liable for damages as a matter of law.

Frequently, for liability purposes, emergency responders ticket the driver whom they believe was at fault. Since many police departments hand out speeding tickets like Santa Claus hands out presents, the negligence per se doctrine frequently applies in car crashes.

However, even if the tortfeasor was travelling below the posted speed limit, speed could still be a factor in a crash. The aforementioned oversteering wrecks are a good example. Other times, rain or other environmental conditions should prompt drivers to slow down. But they do not always do so.

Operating a vehicle at a reasonable speed, given environmental and other conditions, is part of the duty of reasonable care. If tortfeasors breach that duty, and that breach substantially causes injury, they could be responsible for damages.

Defective products, such as stuck pedals or wiring problems, cause a few SUA (Sudden Unintended Acceleration) accidents. These vehicle manufacturers are strictly liable for the damages their dangerous products cause. But the vast majority of SUA wrecks involve operator negligence. The driver hits the accelerator instead of the brake.

In the 1990s, the government rolled out new safety standards for fuel tanks and other flammable vehicle parts. As a result, the number of fireball collisions dropped sharply. However, fire still occurs in a significant number of collisions.

Major fires often destroy physical evidence. That’s a serious problem for Marietta personal injury attorneys, since the victim/plaintiff has the burden of proof in a negligence case. The lack of physical evidence could lead to overreliance on witness statements or other less credible forms of evidence.

Fortunately, a vehicle’s Event Data Recorder usually survives fires. These devices are much like the black box flight data recorders in commercial airplanes. If those gadgets can survive plane crashes, vehicle EDRs can make it through even major fires.

The EDR is often the most important piece of physical evidence in a negligence claim. This device measures and records items like vehicle speed, brake application, and steering angle.

EDR evidence is not easy to obtain and use. Georgia has a very strong vehicle information privacy law. So, Marietta personal injury attorneys normally need court orders before they can download EDR information. Additionally, these devices are technically sophisticated. Effective download requires more than a screwdriver and a laptop.

Vehicle fires usually cause horrific injuries, such as third or fourth-degree burns. Frequently, victims are trapped inside the vehicle until emergency responders arrive.

Generally, accident victims need not worry about these costs. A Marietta personal injury attorney typically uses either a letter of protection or a medical lien to arrange for treatment with no upfront cost. Medical providers agree to delay billing until the case is resolved.

Speed kills. For a free consultation with an experienced personal injury attorney in Marietta, contact The Phillips Law Firm, LLC. We routinely handle matters in Cobb County and nearby jurisdictions.