Investigators believe that a combination of fog and ice might have caused a crash which involved some sixty-nine vehicles. This wreck occurred in Virginia, but it could have just as easily happened in Cobb County.

Overall, fifty-one people were injured in the crash, many of them severely. The crash began on the portion of westbound Interstate 64 which spans the Queens River. The wreckage soon spread to the eastbound side. Officials said rubbernecking caused the eastbound pile-up. Dense fog had settled into the area less than twenty minutes prior to the collision, reducing visibility to less than a quarter mile. The fog might have been freezing fog, which made the road wet.

Ivan Levy said his wife was driving a car she had received as a Christmas gift. “She was all upset about the vehicle, and I was like, ‘Look, honey, it’s just metal,’” he reassured her. 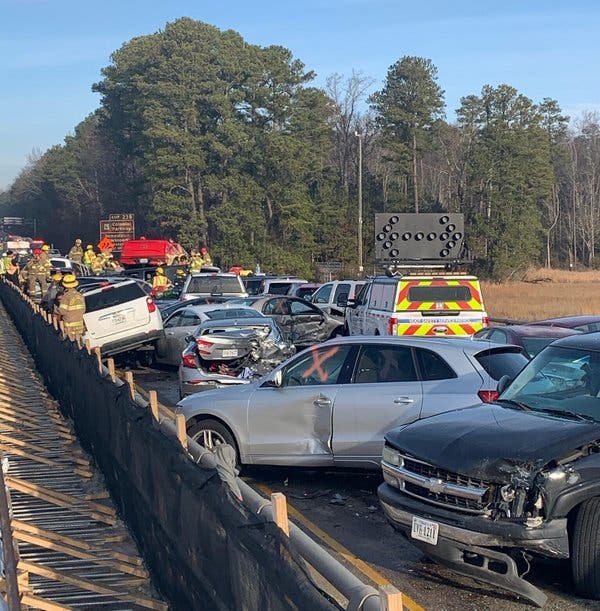 In this context, legal duty is a bit like Georgia’s speed limit. The posted speed limits are presumptively reasonable speeds. Legally, if drivers do not slow down to adjust for adverse road, environmental, or other conditions, officers could ticket them. And, these tickets would probably hold up in court.

Similarly, the duty of reasonable care is not static. This duty is based on the neighbor principle, which is in turn based on the Golden Rule (do unto others as you would have them do unto you).

Drivers must slow down in adverse weather conditions. They must also make the proper mechanical changes to their vehicles, such as installing snow tires when needed. Fortunately, in my opinion, most Georgia drivers have no need for snow tires.

That being said, the duty of care is sometimes the same in different situations. For example, inexperienced drivers are held to the same standard as experienced drivers. The same is true for drivers with physical, mental, or other disabilities.

Commercial drivers who carry passengers for a fee have a higher duty of care. According to Georgia law, these individuals have a duty of highest care. They are almost insurers of safe conduct from one place to the other. This duty does not just apply to driving responsibilities. It also applies to things like breaking up arguments between passengers before they become physical altercations.

This enhanced duty is especially an issue among Uber and other ridesharing operators. These individuals have no special training in this area. Yet the higher duty still applies in these situations.

Black ice is one of the most common winter hazards in Georgia. Many times, the nighttime temperature dips just below freezing. Such temperatures are ideal for black ice formation.

Basically, black ice is a combination of ice and water. That combination makes these patches of ice extremely slick. Additionally, since these patches often form in shady areas where the temperature is a bit lower, they are hard for drivers to spot.

That difficulty does not excuse negligent operation. Drivers must anticipate black ice patches on overpasses or shaded roadway areas. And, as mentioned, they have a duty to slow down.

Fog also makes roads wet. So, drivers have less control over their vehicles, especially if their tires are not in top condition.

Evidence in a Negligence Case

Establishing legal duty is not enough. It’s also not enough to speculate as to a breach of duty. As a matter of law, jurors cannot assume that if there was a patch of fog or ice, the tortfeasor (negligent driver) must have caused the wreck. The victim/plaintiff must introduce evidence on this point. Often, there is physical evidence of negligence, such as:

EDRs are often critical in car crash claims. Computers, unlike eyewitnesses, are never wrong and never biased. Furthermore, the information they present is much more specific. A witness might say a car was travelling fast, but an EDR states that the vehicle was travelling 61.5mph.

Most personal injury claims in Cobb County settle out of court. So, an attorney must be a good negotiator, as well as a good litigator.

If liability is relatively clear, the insurance company has a duty to settle the claim quickly. But there is usually at least some dispute as to liability. That’s especially true in bad weather cases. Things like fog and black ice could affect both the victim and tortfeasor.

Therefore, these cases usually drag on. An attorney must often file legal paperwork to protect the victim/plaintiff’s rights. If that happens, most Cobb County judges refer these matters to mediation. During mediation, insurance companies have a duty to negotiate in good faith. They must be willing to make sacrifices in order to reach a settlement. Therefore, mediation is usually successful.

If the case goes to trial, Marietta personal injury attorneys must establish negligence by a preponderance of the evidence (more likely than not). That’s the lowest standard of proof in American law.

Drivers have a special duty to avoid winter weather crashes. For a free consultation with an experienced personal injury attorney in Marietta, contact The Phillips Law Firm, LLC. Attorneys can connect victims with doctors, even if they have no money or insurance.