A woman faced DUI charges in Bulloch County after she drove into a pond next to Georgia State University’s Education and Engineering buildings.

State Trooper Aaron Ramirez said the driver, who was able to swim out of the partially submerged car along with her passenger, apparently ran a stop sign and drove headfirst into the water. “There wasn’t much to it,” he remarked. “This happens at least once a year,” he added.

The tow truck operator spent almost two hours dragging the vehicle out of the pond. He and his son had to use a fishing boat to connect the car to the cable. 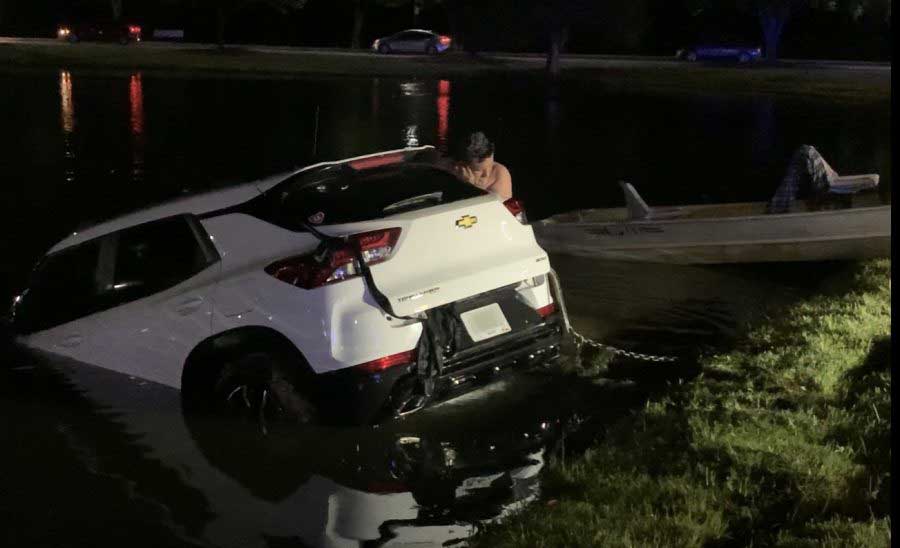 Generally, non-sexual and non-violent criminal convictions don’t torpedo federal student aid applications, unless the student is behind bars or in a halfway house. However, since funds are limited, a criminal conviction could prompt a bureaucrat to send the check to someone else. Additionally, private scholarship funds make their own eligibility rules, as long as these rules don’t run afoul of basic civil rights provisions.

Post-graduation job applications might be the biggest area. Most employers believe that people who drive while intoxicated make poor decisions, especially if they’re so intoxicated they drive into ponds. Quite frankly, in our experience, that assessment is usually true. Most professional positions require people to make lots of judgment calls. If the boss has serious questions in this area, the boss will almost certainly hire someone else.

Largely for political reasons, most jurisdictions limit DUI plea bargains. Typically, prosecutors can reduce the sentence during pretrial negotiations. But they cannot reduce the charges to something like reckless driving or public intoxication. So, a Marietta criminal defense lawyer must aggressively challenge the state’s evidence at every turn.

Normally, DUI collision cases are vulnerable on the “driving” element of a DUI case. Non-collision cases are usually single witness cases (two if you count the dash camera). A police officer saw the defendant commit a traffic violation, and the officer’s investigation led to a DUI arrest.

Collision cases are different. Most likely, the only person who saw the above driver behind the wheel was the passenger in that vehicle. This person was most likely intoxicated, so his/her memory is suspect. That’s assuming this person’s testimony is available at all. Usually, the court’s subpoena power only extends about 150 miles. That’s 150 miles from the courthouse and not 150 miles from the scene of the crime. So, if the passenger was an out-of-town visitor, availability could be an issue.

Unless a credible witness “wheels” the defendant, the jury would almost certainly have a reasonable doubt as to which occupant was driving the car. Of course, that’s assuming the driver remained silent at the scene and didn’t voluntarily answer the dreaded were-you-behind-the-wheel question.

On a related note, some DUI defendants are almost literally unconscious behind the wheel. That was the case in the tragic 2020 Rayshard Brooks police shooting in Atlanta. If the defendant had the keys and if the vehicle was drivable, such DUI charges usually hold up in court.

That second “if” is usually the big one. Prosecutors must normally introduce evidence that the vehicle had gas in the tank and was otherwise operational. Police officers aren’t mechanics. They usually don’t make a note of such things.

Usually, intoxication is the biggest issue, or the only issue, in a DUI case. To prove intoxication, prosecutors can use blood tests, breath tests, field tests, or circumstantial evidence.

Breathalyzers measure breath alcohol level and use that figure to estimate blood alcohol content, which is the legal standard in Georgia. That extra step is a serious design flaw.

Abnormally high mouth alcohol level is a good example of the effects of this design flaw. Technically, the law requires officers to monitor defendants for at least fifteen minutes before they provide breath samples. That monitoring period ensures that the defendant doesn’t burp or belch prior to the test. If that happens, alcohol particles flood from the stomach into the mouth and skew the BAC estimate.

Most courts don’t enforce the monitoring period requirement. Therefore, it’s almost impossible to know if the defendant belched or burped prior to the test.

Field tests, like the walk-and-turn, are almost never available in DUI collision cases. Car crashes are so disorienting that there’s no way to successfully complete these tests, drunk or sober. The lack of field test evidence could affect breath test admissibility. Officers must have probable cause to demand chemical samples.

In the above story, since the driver didn’t go to the hospital, prosecutors must almost certainly rely on circumstantial evidence in court. Most likely, the state would argue that the defendant’s extremely poor driving skills are evidence of intoxication. However, lots of people are bad drivers because they are distracted or fatigued, not because they’re drunk.

If the defendant admitted she’d been drinking, or if she admitted she was driving the car, as mentioned above, these statements are only admissible if officers Mirandized the defendant. That often doesn’t happen in DUI collision cases, since so many other things are going on.

DUI collision charges often don’t hold up in court. For a free consultation with an experienced criminal defense attorney in Marietta, contact the Phillips Law Firm, LLC. We routinely handle matters in Cobb County and nearby jurisdictions.