You are here: Home / Ga State laws / Check and Non-Check Forgery in Georgia: What You Should Know

Back in the day, forgery charges in Georgia usually involved forged checks. Clumsy forgers signed a fake name or added a zero. More sophisticated forgers washed the ink. In any case, if the defendant made good on the check, prosecutors usually dismissed the charged, and for the most part, all was forgotten.

Then, 9/11 shut down commercial traffic out of the blue. In response, banks began discouraging check-writing and encouraging debit card use. Consumer check use declined, but many companies kept writing checks. Check-writing left a better paper trail, and quite frankly, old habits die hard at many large companies.

Now, for the most part, no one issues personal or business checks anymore. So, forgery is more like identity theft. In both cases, the rapscallion makes a false written statement to fraudulently obtain money or services. However, to many voters, identity theft is a lot more unsettling than forgery. So, many elected prosecutors use well-staffed anti-forgery departments to aggressively pursue these defendants.

Usually, a Marietta criminal defense attorney cannot hope to match the state’s vast resources. However, a defense lawyer has something prosecutors don’t have, which is a commitment to uphold the rights of individuals. This passion might not be money in the bank, but it gives attorneys the fuel they need to take on prosecutors and aggressively challenge the evidence in the case.

Elements of the Case 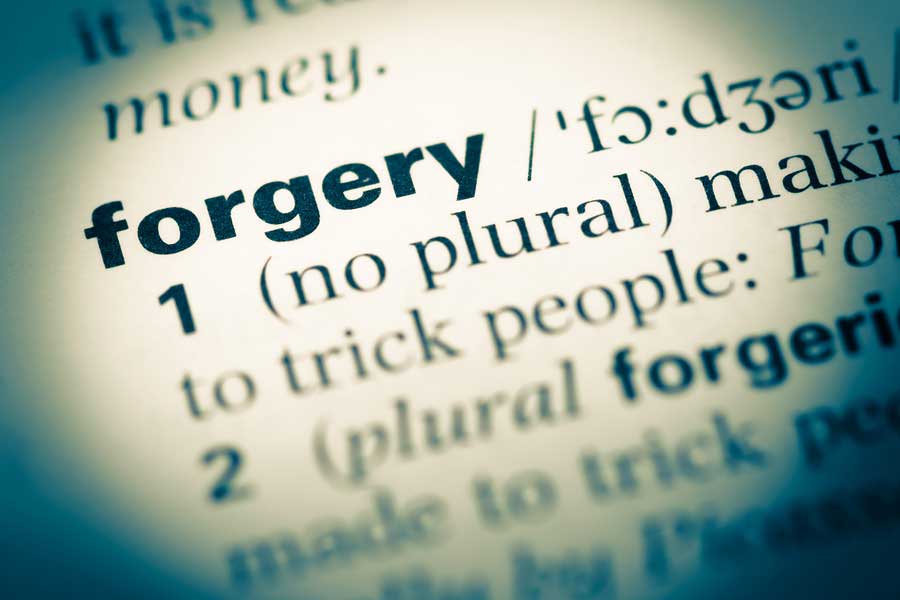 The nature of forgery cases in Georgia has changed considerably since 2001. But the law in this area hasn’t changed at all.

What was once the most common forgery charge in Georgia has now become one of the most uncommon ones. Fourth degree forgery is:

This offense is quite broad. Possessing a check that someone else altered is an offense. So is making such a check and then chickening out before attempting to cash it. In all cases, the defendant must have the intent to defraud, as opposed to the intent to show off or stick it to the man. A first offense is a misdemeanor. So is a second offense. Only a third fourth degree forgery conviction is a felony.

The bulk of these charges are hot check charges. As mentioned, the defendant usually just pays restitution and moves on. However, if push came to shove, the state must prove that the defendant knew there were insufficient funds in the account when s/he wrote the check.

Nowadays, that’s pretty easy to show. Most of us get daily balance alert emails. Back in ye olden days, when bank statements came in the mail once a month, this element was harder to prove, especially beyond any reasonable doubt.

The next step up, which is always a felony, is third degree forgery. The same making, altering, possessing, uttering, or delivering requirement applies. The mental element is the same as well. However, the defendant must have a single false check for more than $1,500 or more than ten false checks in any amount.

Miscounting is sometimes an issue in these cases. Frequently, these forgers are more sophisticated than the hot check writers who were charged with basic check forgery. A forger might have one model check and nine fake ones. Math isn’t our best subject, but we’re pretty sure that such a case isn’t advanced check forgery.

Now, we cross over into the realm of some modern forgery cases. Drug prescriptions and drug labels are among the most common examples. Many people alter the patient’s name, the dose requirements, or the number of refills. This offense could be charged in some different ways, usually depending on whether prosecutors want to highlight or downplay such incidents.

In general, over half of non-check forgery cases involve foreign identification card forgery, which could be charged in federal court. Frequently, unscrupulous people make these documents then sell them to even more unscrupulous people, or perhaps people who want to bypass immigration laws. Many foreign ID cards don’t have advanced security features. For example, India’s ID card is a piece of paper that has practically no security features. However, it’s hard to prove the mental element of second-degree forgery in such cases.

This mental element is the intent to defraud. Basically, fraud is a misrepresentation of a current fact to obtain property or benefits.

Second degree forgery is making, altering, or possessing a forged non-check document. First degree forgery, the most serious such offense, is delivering or uttering such an instrument. So, using a laser printer to make a fake ID and hopefully sell it is different from using a fake ID to buy beer at a Stop-n-Go. Similarly, it’s a more serious offense to present a fake prescription to a pharmacist than it is to take one to the Walgreen’s parking lot.

We’ll end this blog as we began it, by discussing some potential forgery charge resolutions in Cobb County and elsewhere.

We mentioned restitution, which is usually part of a pretrial diversion package. Other requirements often include community service and a self-improvement class. Additionally, defendants must avoid further trouble with the law while they’re in the program. Usually, such programs last about three months.

In more serious cases, the state might want to move forward with the case, or the defendant might not have the money to make restitution. If there are issues proving the mental element or another defense applies, a Marietta criminal defense attorney has excellent negotiation leverage and may even be able to get the charges thrown out of court. Otherwise, these cases are difficult, although certainly not impossible, to defend.

The nature of forgery has changed, but the laws haven’t changed. For a free consultation with an experienced Marietta criminal defense lawyer, contact The Phillips Law Firm, LLC. We routinely handle matters in Cobb County and nearby jurisdictions.