You are here: Home / Criminal / Breaking Down a Georgia Disorderly Conduct Charge

Prior to the smartphone era, Section 16-11-39 of the Georgia Code was one of the most commonly charged offenses in Cobb County. If you looked at an officer wrong, you would probably be charged with disorderly conduct. Today, these charges aren’t quite as common, but they are still numerous. Oh, and in case you’re wondering, it is tentatively legal to film police officers in Georgia. More on that below.

Disorderly conduct is a misdemeanor, but it is always serious. Criminal convictions have both direct and collateral consequences. Only a good Marietta criminal defense lawyer knows the best way to reduce or eliminate these consequences. So, you do not want to face these charges alone. There is simply too much at stake. 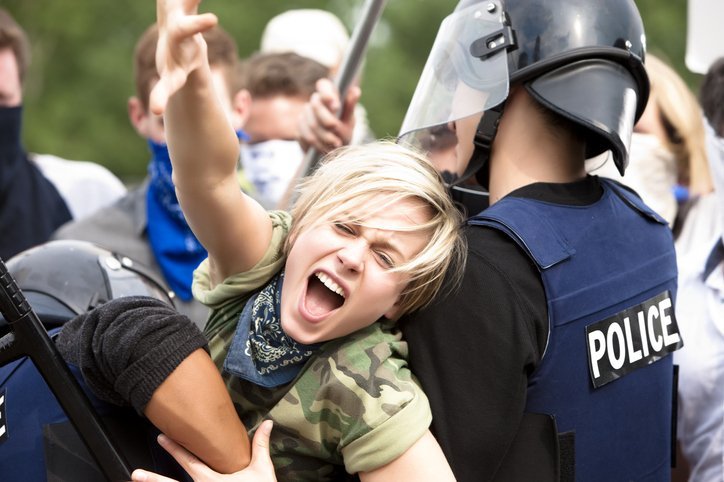 Hands down, the disorderly conduct law is one of the most subjective criminal laws in Georgia. Many defendants have attempted to challenge the law on Constitutional vagueness grounds, but all these attempts have failed. So to this day, disorderly conduct could be:

Obstructing a law enforcement officer, which is almost always a physical act, is a related offense. Sometimes, the act is rather passive. People must answer basic name, rank, and serial number questions. They must also obey basic commands, like “step out of the vehicle.” Refusal to do these things, complaining while doing them, or not doing them quickly enough, could be misdemeanor obstruction. People have a Fifth Amendment right to refuse to answer further questions or do other things, like perform Field Sobriety Tests.

Speech could be obstruction if it is an immediate and credible threat of violence. An inebriated college student’s threat to kick an officer’s you-know-what is arguably not a credible threat.

A quick note about DUI and passenger obstruction. These cases are not uncommon. Typically, an officer tells the driver to step out of the car. The passenger, who feels a duty to protect the driver, steps out of the car as well, probably to remain close to the driver. That’s understandable, but also illegal. Generally in these situations, officers warn passengers to stay seated before they arrest them. But this warning shot is by no means guaranteed. Some officers arrest these individuals on the spot.

As mentioned, the disorderly conduct statute is quite vague. Do you even know what “opprobrious” means? And it is cheating if you Googled it. So, let’s have a look at a few recent examples. Most disorderly conduct cases settle out of court, so recorded cases are few and far between. But here are a few from the last twenty or twenty-five years.

Abusive language is deeply offensive to many people. But f-bombs and s-bombs do not constitute disorderly conduct even when spoken directly to another person, unless the person is under 14 or the profanity also contains a violent threat. We can probably image what that sounds like.

In one case, police arrested a woman for causing a scene during an arrest. She shouted things like “you can’t tell me what to do,” “this is public property,” “I don’t have to leave this street,” “I can come over here and find out what’s going on,” and some other things which should not be reprinted on a family-friendly website. The court ruled that, although her tirade could have incited the gathering crowd, she did not intend to do so.

Lack of intent works both ways. In another case, a man very unwisely waved a two-by-four with a nail in it while he was in a crowded bar. Though he did not intend to threaten anyone, a waitress filed a complaint. The court upheld the man’s disorderly conduct conviction.

Provocation is the only defense specifically mentioned in the disorderly conduct law. The “he started it” defense never worked with my mother. But it might hold up in criminal court, mostly because the state has a very high burden of proof. Bear in mind that many arguments are running arguments. They simmer for several hours or even longer before someone boils over.

Filming the police is one of today’s most controversial activities. Many people are determined to do it, and many officers are equally determined to stop it, almost always by arresting people for disorderly conduct. The Eleventh Circuit, which includes Georgia, recently held that people have a First Amendment right to film police activities. So, unless the Supreme Court rules otherwise, such activity is legal in Cobb County. Officers can still enforce reasonable time, place, and manner restrictions. For example, they can order digital shutterbugs to remain behind a line, as long as that line is not a block away.

Also as outlined above, lack of intent might or might not be a defense, depending on the nature of the defendant’s conduct.

Since disorderly conduct is a nonviolent misdemeanor, pretrial diversion is generally available. That’s especially true if, as is usually the case, the evidence is somewhat weak or one of the above defenses might apply.

Essentially, if the defendant stays out of trouble for a few weeks and completes some program requirements, like completing an anger management class, prosecutors dismiss the charges.

In more serious cases, deferred adjudication might be available. The judge places the defendant on probation for a few months. If the defendant successfully completes probation, the judge dismisses the case.

A few final words about “the principle of the thing.” For some people, vague offenses like disorderly conduct are an example of police power running amok. That attitude is understandable and usually accurate. However, if deferred prosecution or deferred disposition is an option, it is usually best to take it, even if the officer was clearly over the line or you have a solid defense. A bird in the hand is almost always worth two in the bush.

Officers may press disorderly conduct charges almost at the drop of a hat, but successful resolutions are available. For a free consultation with an experienced criminal defense attorney in Marietta, contact The Phillips Law Firm, LLC. We routinely handle matters in Cobb County and nearby jurisdictions.