You are here: Home / Criminal / Winning Strategies in the Four Types of Cobb County DUI Cases

Roughly thirty years after the DUI crackdown began in Georgia and most other states, it is back to square one. The alcohol-related car crash fatality rate is almost as high today as it was in 1989. Clearly, the anti-DUI efforts have plateaued, and many jurisdictions are looking for ways to chance that dynamic.

Utah recently went out on a limb and lowered the legal limit to .05 BAC in most cases. That change took effect in January 2019, so it is far to early to tell what impact it will have. Predictably, advocates of that law say it will reduce the number of alcohol-related fatalities, and the Utah hospitality industry says the lower limit will simply increase the number of arrests. Curiously, Mothers Against Drunk Driving, the nation’s largest anti-DUI advocacy group, did not endorse this change.

Another development was 2016’s Birchfield v. North Dakota. This Supreme Court case legalized get-tough refusal-to-submit laws. These statutes allow stiffer penalties for Breathalyzer refusals and also authorized blood tests. In light of this case, which has nationwide applicability, it’s important to look at the four types of DUI prosecutions in Cobb County.

Most people know they have the right to remain silent when police officers pull them over. But most people do not know the extent of that right, and how it affects the course of the police encounter.

After the officer approaches the driver, the officer immediately begins looking for evidence of alcohol intoxication. At this stage, such evidence includes:

Individually, these items essentially prove nothing. For example, an order of alcohol only establishes that someone in the car had been drinking at some point in the recent past. But collectively, these items are fairly compelling. Additionally, at this stage, officers must only have reasonable suspicion of intoxication. “Reasonable suspicion” is basically an evidence-based hunch.

During the stop, suspects must answer name, rank, and serial number-type questions. They must also produce certain documents, such as a drivers’ license, and comply with basic “step out of the car” commands. They need not do anything else or say anything else.

If the suspect behaves this way, officers will almost certainly arrest the defendant. But that outcome was probably inevitable once flashing lights appeared in the rear-view mirror.

More importantly, at trial, prosecutors must use the reasonable suspicion evidence to establish guilt beyond a reasonable doubt. That’s a much higher standard. So, the conviction rate in complete refusal cases is only about 35 percent, in most jurisdictions.

In about one in five cases, drivers do everything police officers ask them to do except provide a chemical sample. That includes performing the three government-approved field sobriety tests. The FSTs provide much stronger evidence of intoxication. That’s the main reason the conviction rate moves up to about 45 percent in partial refusal cases.

The FSTs have a number of flaws, so it is difficult to prove guilt beyond a reasonable doubt. The three approved tests are:

Officers may also order the defendant to perform unapproved tests, like the intricate Romberg balance test. At best, these results are usually only admissible for limited purposes. Typically, Cobb County judges exclude them altogether if the Marietta criminal defense attorney makes a compelling request. 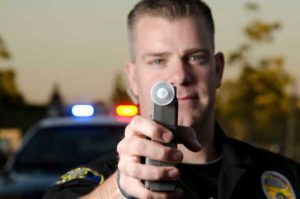 If the defendant takes a breath test, the conviction rate shoots up to about 85 percent. Unfortunately, most Cobb County DUIs are breath test cases. However, all is not lost, as there are still some defenses in this area.

Testifying officers tell the jury that the Breathalyzer is a cutting-edge piece of sophisticated modern equipment. But strip away the bells and whistles, and the Breathalyzer is basically the same gadget as the 1950s Drunk-o-Meter. If the doctor wants to X-ray your body, would you like the doctor to use an I Love Lucy-era contraption? Probably not.

Once the jurors understand this overall flaw, they are more likely to embrace some specific flaws. Some common ones include:

Flaws like these are especially effective in .08, .09 and other borderline BAC cases.

Admittedly, these cases are very difficult to win. The conviction rate is about 95 percent. Fortunately, blood tests require search warrants. In most cases, Cobb County law enforcement officers do not want to deal with the extra paperwork. So, blood test cases are not very common.

Blood test DUI cases may involve both procedural and substantive defenses. Procedurally, these cases have lots of moving parts. The sample must go to several different places. A gap in the chain of custody diminishes the credibility of the evidence. Additionally, a criminal defense attorney may request a blood re-test. Many times, these results are much different from the ones the police technician obtained at a police laboratory.

Reach Out to a Dedicated Lawyer

All four types of DUI prosecutions are winnable in court. For a free consultation with an experienced criminal defense attorney in Marietta, contact The Phillips Law Firm, LLC. We routinely handle matters in Cobb County and nearby jurisdictions.