There is an old story that if someone drops a penny from the top of the Empire State Building, the penny would gain enough speed on the way down to kill a pedestrian on Fifth Avenue. That story is mostly false. The penny would not kill the pedestrian, but it would give the pedestrian a very serious headache.

Nevertheless, this story does illustrate the relationship between speed and the seriousness of a collision between two objects. According to Newton’s Second Law, there is a multiplying factor. If I drop a penny on my friend’s head while he is sleeping, he may not even wake up. But if I dropped a penny on him from the top of the Empire State Building, I might send him to the hospital.

Speed also increases the risk of a collision. Research states that for every mph a vehicle travels, the chances of a fatal collision increase by almost 10 percent.

As a result of these two things, speed is a factor in about a third of the fatal car crashes in Cobb County. Because of the seriousness of the injuries, an attorney may be able to obtain substantial compensation in these cases. This compensation usually includes money for economic losses, such as medical bills, and noneconomic losses, such as pain and suffering. Additional punitive damages may be available as well, in some cases. 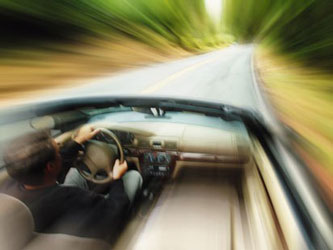 That one-third factor may be understated. Generally, emergency responders only list excessive speed as a factor if the tortfeasor (negligent driver) was exceeding the posted speed limit. But in many cases, a diver may be “speeding” for negligence purposes yet not be speeding for traffic law purposes.

Nighttime driving is a good illustration. Many freeways, especially rural two-lane freeways, in Cobb County have lower posted speed limits at night than during the day. That’s because stopping distance increases at night. The dark skies inhibit visibility, and oncoming headlights reduce visibility even more. As a result, drivers have less time to react to emergency situations. Prudent drivers slow down after the sun sets. But many drivers keep barreling ahead at the same speed.

Wet roads are another good example. When a thin layer of water, oil, and other substances glazes the road, many tires have little traction. That’s especially true if the tire tread is at all worn. This lack of traction increases stopping distance. Once again, reasonable drivers slow down and negligent drivers do not.

These kinds of claims are even easier to prove in court if the tortfeasor was a delivery driver, Uber driver, or other common carrier. These operators have a higher duty of care. As a result, it is easier to prove negligence, or a lack of care.

Furthermore, in civil court, victim/plaintiffs need only establish negligence and other facts by a preponderance of the evidence (more likely than not). That’s the lowest standard of evidence in Georgia courts.

Speed and Negligence Per Se

Liability is even easier to prove if the tortfeasor was exceeding the posted speed limit. According to the negligence per se rule, tortfeasors are liable for damages as a matter of law if:

Justification may be a defense. If the tortfeasor had a good reason for speeding, liability may not attach. But anyone who has ever tried to talk their way out of a speeding ticket knows how difficult this endeavor is.

A vehicle’s Event Data Recorder is usually the best way to establish excessive speed in a negligence per se case. EDRs store vehicle speed. These gadgets also store other information critical to a car crash claim, such as steering angle and brake application.

Georgia has very strict vehicle data privacy laws. So, an attorney normally needs a court order to access and download the information on an EDR. Unless these legal motions are presented in the proper form and in the proper way at the proper time, Cobb County judges routinely refuse to sign them.

Additionally, if a lawyer does not act fast, the EDR may be gone. Most insurance companies destroy totaled vehicles after a few days. To prevent EDR loss, an attorney must send a spoliation letter to the insurance company. These letters create a legal duty to preserve all potential physical evidence in the case.

Georgia has one of the lowest auto insurance minimum requirements in the state. As a result, many tortfeasors do not have sufficient insurance coverage to pay fair compensation in catastrophic injury cases.

Additionally, personal auto insurance policies may not cover commercial losses. So, if a speeding Uber driver or pizza delivery driver causes a crash, the tortfeasor’s insurance company may deny coverage.

Fortunately, Georgia also has very broad vicarious liability rules. Respondeat superior (“Let the master answer”) may be the most common third-party liability rule. It holds Uber, the pizza company, and other employers liable for the negligent acts of their employees if:

Reach Out to an Aggressive Lawyer

Speed kills. For a free consultation with an experienced personal injury attorney in Marietta, contact The Phillips Law Firm, LLC. We do not charge upfront legal fees in negligence cases.