Back in the 1970s, the novelty Christmas song Grandma Got Run Over by a Reindeer was a big hit. They even made a cartoon movie out of it. Although the incident happened about fifty years ago, depending on how authorities responded, Santa might want to watch his back when he visits Cityville.

According to the song, Grandma ignored her family’s pleas and tried to walk home late on Christmas Eve. Possibly as she crossed the street, Grandma got run over by a reindeer.

This story is tragic. It’s even more tragic to think that Santa Claus could be on the hook for felony hit-and-run and a large civil judgment. What will the children think?

What Must Be Proved in Court 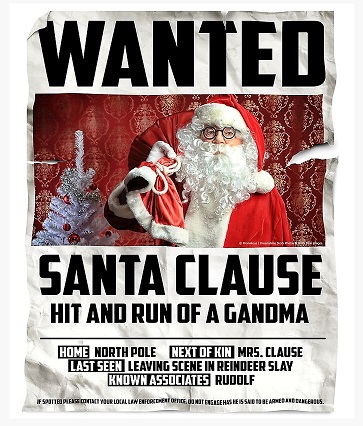 Hit-and-runs like this one often have criminal law and civil law implications. Criminal court holds drivers responsible for their actions and civil court compensates the victims or survivors of these wrecks.

The criminal hit-and-run statute is Section 40-6-270. All drivers involved in wrecks, whether or not the wreck caused personal injury and whether or not the driver was at fault, must stop, provide vehicle information, render aid if possible, and wait for emergency responders to arrive.

The first and last requirements are the same in all states. The last requirement varies slightly. Most departments don’t respond to vehicle collision reports, unless someone was seriously injured.

The second and third requirements vary in different states. In some jurisdictions, drivers don’t have to provide insurance information unless the damage exceeds a certain dollar amount. The render aid requirement is absent in most other states. Usually, drivers may leave this task to trained emergency responders.

Generally, hit-and-run is only a felony if the crash caused a serious injury. Otherwise, it’s usually a misdemeanor.

In contrast, the burden of proof in civil court is only a preponderance of the evidence, or more likely than not. A Marietta personal injury attorney must also prove the driver was negligent. Basically, negligence is a lack of care. Driver error causes over 98 percent of the car wrecks in Georgia. Typically, driver error is a lack of care.

Here’s how that difference breaks down. In criminal court, unless a credible witness got a good look at the driver, a Marietta criminal defense lawyer can normally beat the rap. In civil court, an attorney must normally only identify the vehicle’s owner. It’s more likely than not that the owner was deriving the vehicle.

Evidence at the Scene of the Crime

Back to the song. No one saw the fateful incident, but diligent investigators found some key physical evidence, such as Claus marks and hoof marks on poor Grandma’s lifeless body.

That evidence might identify Santa Claus in criminal court. Tire marks on Grandma’s back would be almost meaningless. However, there’s only one person we know who flies in a reindeer-driven sleigh on Christmas Eve. This evidence would almost certainly be enough for Grandpa to obtain compensation in civil court, because of the lower burden of proof.

The reliability of this evidence is a question mark. Investigators didn’t find Grandma’s body until the next morning. Additionally, Grandma’s family arrived at the scene first. There’s no telling what they did. Potential tampering with evidence is a big deal in criminal court, because of the higher burden of proof.

We should stop and note one of the lingering conspiracy theories related to this song. Grandpa seems to have recovered very well from the trauma of losing his wife. In fact, it’s downright suspicious that he can watch football and play cars with Cousin Earl while his wife’s body is still warm. These things could affect Grandpa’s credibility in court.

Additional evidence may be available as well. Most security and traffic cameras run 24/7/365, even on Christmas Eve. If a camera captured an image of Santa’s sleigh, even if Santa didn’t smile for the camera, the Jolly Old Elf’s fate might be sealed.

When Grandma staggered out into the snow, she had over-indulged in eggnog and was therefore intoxicated, or at least impaired. Furthermore, she wasn’t on her medication. Depending on what that medication was for, Grandma’s perception and other abilities might have been affected.

A hit-and-run victim’s capacity is irrelevant in criminal court. The defendant’s conduct is all that matters. However, in civil court, Grandma’s capacity is highly relevant, because of the contributory negligence rule.

Comparative fault rules vary in different states. Georgia is a modified comparative fault state with a 50 percent threshold. If the victim was less than 50 percent responsible for a wreck, the tortfeasor (negligent driver) is liable for a proportionate share of damages.

Warrants and Statutes of Limitations

Usually, for negligence cases, the statute of limitations in civil court is two years. The discovery rule, which wouldn’t apply in this case, extends the statute of limitations in some cases. Victims don’t have to file civil claims until they know they full extent of their damages and they connect those damages to a tortfeasor’s wrongful conduct. The civil case against Santa isn’t open and shut, but it’s enough to put Grandpa on notice that Santa was probably the culprit.

No matter how you celebrate Christmas, we hope you have a good one. For a free consultation with an experienced Marietta criminal defense attorney, contact The Phillips Law Firm, LLC. We routinely handle matters in Cobb County and nearby jurisdictions.