A Powder Springs motorcycle rider is clinging to life after an intersection collision not far from his home.

The wreck occurred near the intersection of James Road and the Veterans Memorial Highway. According to police and witnesses, an unnamed driver was northbound on James in a Crown Victoria. After stopping at the stop sign, he entered the intersection. In so doing, he crossed directly into the path of 39-year-old Richard Pack, who was westbound on the Veterans Memorial Highway. First responders rushed Mr. Pack to a nearby hospital with serious injuries.

Although the Cobb Police Department is still investigating the wreck, officers do not expect to file charges at this time. 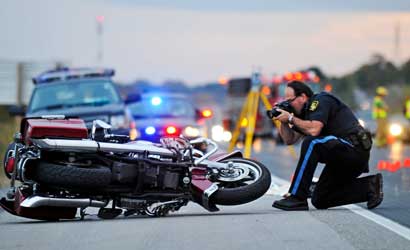 Since the early 2000s, better-built cars have somewhat reduced the number of car crash fatalities in the United States. But motorcycle riders benefit from none of these advances. In a vehicle collision, they almost literally only have the clothes on their back for protection. Motorcycles do not have advanced restraint systems and crash-resistant bodies.

As a result, motorcycle riders are almost thirty times more likely to die in a crash. Some of the serious injuries they sustain include:

Damages in a motorcycle crash case include money for economic loss, like hospital bills. Given the serious nature of these and other injuries, these bills are usually staggering. A Marietta personal insurance attorney can make sure that your medical bills get paid. Additionally, an attorney also ensures that you see a doctor who focuses on motorcycle crash injuries.

The aforementioned injuries also lead to significant noneconomic damages. Such damages include things like:

Depending on the facts of the case and some other variables, the noneconomic damages could be three times the economic losses.

While substantial compensation is available, there is no guarantee. To receive compensation, the tortfeasor’s (negligent driver’s) conduct must have been below the standard of care.

Under Georgia tort law, most drivers have a duty of reasonable care. They must drive defensively and obey the rules of the road. These requirements may sound simple, but in many intersection collisions, they are actually quite complex.

Sometimes, a statute establishes the standard of care. In Georgia, tortfeasors may be liable for damages as a matter of law if they violate a safety statute and that violation substantially caused the victim/plaintiff’s injuries.

Additionally, a Marietta personal injury attorney must have evidence to support your claim. Such evidence might include:

The victim/plaintiff must establish negligence by a preponderance of the evidence (more likely than not).

The above story is a classic example of an intersection claim and contributory negligence. It appears that both drivers may have been partially at fault.

Georgia is a modified comparative fault state with a 50 percent bar. So, if the tortfeasor is at least 50 percent responsible for the wreck, the victim/plaintiff is entitled to a proportional share of damages.

Evidence is even more important in comparative fault situations. The more evidence which indicates the tortfeasor’s blame, the more responsibility the jury will pin on the tortfeasor. That means more money in the victim’s pocket.

Other intersection collisions involve the last clear chance doctrine. This rule, which is very common in rear-end and head-on collisions, excuses tortfeasor liability if the victim did not seize the opportunity to avoid the crash. That chance could have been changing lanes or making another evasive maneuver.

But if the victim/plaintiff was on a motorcycle, the last clear chance doctrine rarely applies. It’s much harder to maneuver a motorcycle, especially if the road is not immaculately maintained and there are any adverse environmental conditions, like a wet road.

Team Up with an Assertive Lawyer

Motorcycle crash victims may be entitled to significant compensation. For a free consultation with an experienced personal injury attorney in Marietta, contact The Phillips Law Firm, LLC. Home and hospital visits are available.