After officers pursued a vehicle through residential areas at speeds over 100mph, the suspect driver lost control of his car and crashed into a utility pole.

Four people, including two teenagers, were inside the car. Initially, Georgia State Police troopers tried to detain the vehicle for speeding on Interstate 75 near the Interstate 20 interchange. Rather than pull over, the car sped away. “The pursuit traveled through many city streets, as well as I-75,” according to a GSP spokesperson. Eventually, the driver lost control of the vehicle as he tried to turn from Lowery Boulevard onto Atlanta Student Monument Boulevard. Police charged the two survivors with several infractions, including possession of illegal weapons and narcotics.

None of the four victims was wearing a seat belt. 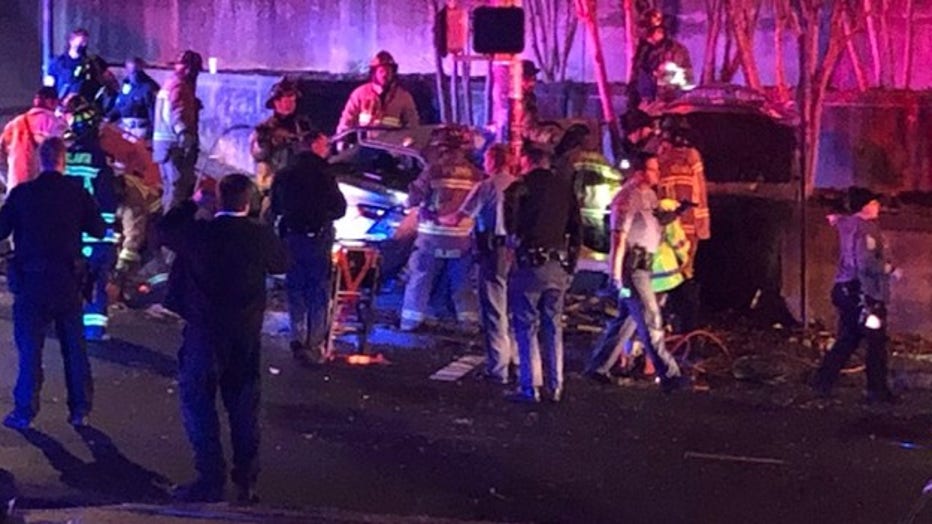 These incidents have been in the local news a lot since the onset of the coronavirus pandemic. For that reason, in January 2020, former Police Chief Erika Shields enacted a no-chase policy which was very unpopular among many officers. About a month previously, two people had died in two separate reckless high-speed police chases. One of them was a father who was picking up medicine for his disabled son.

A year later, interim Police Chief Rodney Bryant rescinded that ban. The revised policy, which is similar to the one that the Georgia Highway Patrol uses, authorizes high-speed chases if officers have “direct knowledge” that the fleeing vehicle contains a suspect in a “forcible felony.”

This flip-flop represents the conflict all police officers feel in this area. They do not want to put people at risk, but they also want to “get the bad guy” regardless of the cost. Far too frequently, especially in metro Atlanta, the latter instinct takes precedence over the former one.

Intent is irrelevant in negligence claims. Even if the tortfeasor (negligent driver) had good intentions, car crash victims are entitled to compensation for their serious injuries. This compensation usually includes money for economic losses, such as medical bills, and noneconomic losses, such as pain and suffering. Theoretical availability is one thing. Obtaining it is another, especially if the at-fault driver is a police officer.

Two legal doctrines, sovereign immunity and official immunity, make it more difficult for a Marietta personal injury attorney to obtain compensation in these matters, even if a police officer was clearly negligent.

Sovereign immunity is by far the biggest obstacle to compensation. This doctrine has roots in the Middle Ages. Back then, many people believed that God directly appointed kings and queens. So, the sovereign could not make a mistake, since God couldn’t make a mistake.

This concept is still part of American law, although it has been watered down greatly over the years. Now, if a government official, such as a police officer, is negligent, Georgia law usually allows actions to proceed. This process is a bit complex, as outlined below.

Before we get there, we should discuss “negligence” in the context of official immunity. This controversial doctrine is what protects police officers when they shoot people in the line of duty. Pursuing officers have some official immunity. They need not stop at red lights or obey speed limits. However, their immunity is not unlimited. A Marietta personal injury attorney could pursue a legal damages claim if:

Even if the sovereign immunity and official immunity doctrines do not apply, victims are not entirely in the clear. There are some procedural hurdles to consider as well.

Mostly for publicity reasons, some lawyers immediately file lawsuits on behalf of injured victims. If the negligent actor was a government employee, this tactic is illegal in Georgia and most other states.

These victims must initially file a notice of claim. This semi-private procedure, which is a bit like modified arbitration, gives the state, city, or other government entity a chance to investigate the claim and settle it quietly. If the parties cannot agree on a settlement figure, and they usually have a duty to negotiate in good faith, a victim may then file a legal claim.

For the record, that’s usually the procedure we follow at The Phillips Law Firm. We hardly ever run to the courthouse. Instead, we at least try to settle disputes quickly and quietly. Such resolutions are usually better for everyone.

The Seat Belt Defense in Georgia

One major aspect of the above story is not limited to police chases. All fur of the victims were not wearing seat belts. IN some states, failure to wear a seat belt either torpedoes a damage claim or makes it very difficult to obtain maximum compensation. Generally, insurance companies can at least bring up the fact that the victim was not properly restrained.

But the Peachtree State is different. Georgia law flatly states that seat belt non-use “shall not be evidence used to diminish any recovery for damages arising out of the ownership, maintenance, occupancy, or operation of a motor vehicle.” So, if you were hurt in a wreck and were not wearing a seat belt, for whatever reason, the insurance company cannot use this fact against you in court or during settlement negotiations. Incidentally, this same basic rule applies to motorcycle helmets.

Police officers have only limited immunity in injury cases. For a free consultation with an experienced personal injury attorney in Marietta, contact The Phillips Law Firm, LLC. We routinely handle matters in Cobb County and nearby jurisdictions.