You are here: Home / Trucking accidents / Controversial Wreck in Atlanta Kills One, Injures One

Although almost no details about the accident were available, investigators insist that a passenger car was responsible for a serious collision in the ATL.

According to police investigators, a woman driving a blue car lost control of her vehicle as she traveled eastbound on the Donald Lee Hollowell Parkway. She crossed the center line and collided with a westbound Freightliner. The woman died at the scene. First responders rushed a male passenger to a nearby hospital with critical injuries.

No other details were available and none of the names were released.

The Difference Between Fault and Liability 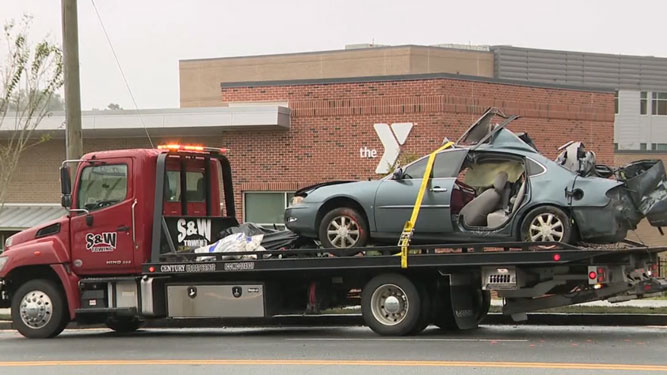 In a nutshell, fault is a preliminary determination based solely on the evidence immediately available at the scene. So, this preliminary determination is often wrong. Liability, which is the only area that really matters in a car wreck claim, is a final determination based on all evidence, as well as applicable legal theories. Therefore, if you were hurt in a car crash, a Marietta personal injury lawyer should always evaluate your claim, even if a police officer or insurance adjuster said you were at fault. That’s especially true if you were hurt in a “who had the light” intersection collision, rear-end crash, or wrong-way crash.

Frequently, the police accident report is the most important piece of evidence in a car wreck claim. It details the physical evidence and, perhaps more importantly, includes an accident reconstruction narrative report. Since it’s part of an official document, this narrative is usually admissible in court.

But there are sometimes some issues with this report. The author is one possible area. Occasionally, an individual first responder writes and files the police report almost immediately after the accident. Even the most experienced first responder is not an accident reconstruction engineer, so the analysis used is questionable. Only reports written by a group of highly qualified investigators and filed several days or weeks after the accident are truly authoritative.

The source is often a problem as well. Emergency responders usually rely on the drivers who were involved in the accident. If the victim was killed or catastrophically injured, the report therefore only contains one side of the story.

Typically, operational errors, mostly speeding, cause drivers to lose control of their cars. However, something else, like a tire defect, could also cause a loss of control. Defective tires are a factor in about 33,000 crashes a year. Generally, the owner knows nothing about the potential defect. Manufacturers send recall notices to record owners. Many used vehicles are on their second or even third owner. So, in the above story, if a tire defect or other issue caused the driver to lose control, the driver was most likely not negligent and therefore not liable for damages.

Pretty much every vehicle collision claim involves at least one legal defense. These defenses greatly affect issues like liability for damages.

The last clear chance doctrine is one of the most common defenses in wrong-way collisions. If Harry sees Sally cross the center line, he has a chance to avoid a crash, perhaps by changing lanes, and he does nothing, Harry could be liable for damages, even though he did nothing wrong and Sally was probably at fault for the wreck, based on the evidence at the scene.

This doctrine is quite complex for many reasons. For example, there’s a difference between the last clear chance and any possible chance. Unless a wide median separates the two sides of the road, these wrecks usually happen so fast that there’s no way to avoid them. The last clear chance doctrine is a theoretical idea as opposed to a legal defense.

Comparative fault is a very common defense as well, and not just in wrong-way claims. This doctrine shifts blame for an accident from the tortfeasor (negligent driver) to the victim. For example, perhaps Harry changed lanes without signaling and Sally was speeding. In such situations, jurors must divide fault between the parties on a percentage basis.

Almost all car crash and other personal injury claims settle out of court. But these claims very rarely settle right away, mostly due to the fault-versus-liability issues discussed above. Additionally, if the claim settles too early, the settlement amount might not fully reflect all the damages in the case, like future medical expenses.

So, most personal injury claims settle during mediation. A third-party mediator, who is usually an unaffiliated Marietta personal injury lawyer, meets with both sides and steers them toward a settlement. Both sides have a duty to negotiate in good faith. The law requires them to compromise on some points, if that’s what it takes to settle the case. So, the insurance company cannot take a hard line approach. Largely because of this duty, civil mediation is usually about 90 percent successful.

Even seemingly straightforward car wreck cases are often difficult to resolve. For a free consultation with an experienced personal injury attorney in Marietta, contact The Phillips Law Firm, LLC. We do not charge upfront legal fees in these matters.